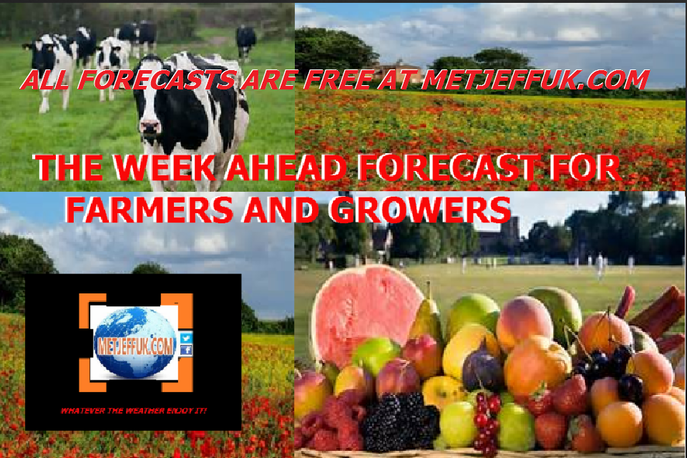 HI,
Thanks for coming to the metjeffuk web page Can you help?  Due to ongoing costs of this website we need extra funds, any amount will help so please click on the donate button- Help keep this website Free thank you. click here to donate

​Tuesday
Outbreaks of showery rain for most Best of the sunshine in northern  Ireland and the west of Scotland were a fresh north to northeast wind will make feel chilli. The wind will be increasing in northern England, Scotland and Northern Ireland. Highs at 12C/54F

Wednesday
A northeast wind will make it feel cold despite plenty of  sunshine and it should stay largely dry nny spells in much of the Midlands, southwest England and northwest England as well as Wales. Tops at 11 to 15


Thursday
Mostly dry day or England and Wales as well as western Scotland. increasing cloud and rain as well as stronger winds will spread in to northern Ireland later. High of  12C/54F

Friday
High pressure will be to the north of Scotland on Friday.
Sunny spells in northern and eastern areas. More cloud in western parts of the UK and Ireland with a risk of some rain in to  the far southwest of England. Winds picking up later from the SE.

Saturday
Low pressure southwest of Ireland on Saturday with higher pressure to the north. Cloud and some outbreaks of rain may affect southwest England. Cloud and some spots of rain in eastern Scotland and over the coasts of northeast England too. Broken cloud and some bright or sunny spells elsewhere,  a cold east wind with a from 7C/45F Scotland to 11C/52F in the SW of England

Sunday
A cold day with higher pressure to the north and a ridge extending across the UK and Ireland. Broken cloud and the risk of some spots of rain north and east. Somewhat drier to the south and west. Highs at 8 to 10C. up to 50F

Monday 1
Stronger winds may affect the southwestern parts of the UK with a risk of rain. Drier to the north and east although broken cloud in all areas. Highs at 13C/55F

Tuesday
Lower pressure brings an unsettled and breezy day across most of the UK with periods of rain at times, in the west and south and some of this could be heavy and thundery. dryer in the east. Highs at Less Cold with a High of  15C/59F​
​
​Whatever the weather enjoy it!